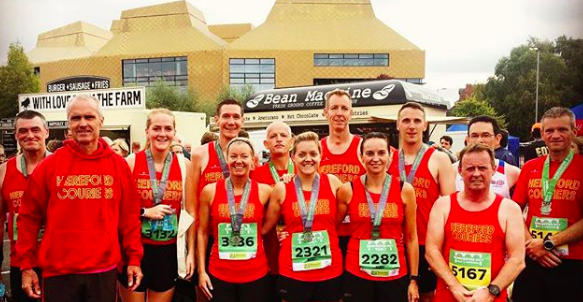 It was a busy weekend of running for the Hereford Couriers as many runners took the red vest on tour to Worcester, Swansea and locally Upton Bishop as recent training sessions paid off for the Couriers as many personal best performances were recorded and a local course record was broken!

Barry Reynolds took on the hills of Upton Bishop in the Big Dipper 10k race but he wasn’t going to settle for just a first place finish be also came away with a new course record in a time of 35:45 and Barry’s son Alfie made it 2 wins for the Reynolds picking up first place in the kids race!

A smaller team of Reds ventured into South Wales to take part in the Swansea 10k with majority of the course along the June Half Marathon route but luckily not half as hot as the race during the summer, We had a team of Sheryl Evans, Amy Smith and Peter Carwardine at the race with Sheryl recording a fine time of 44:17 with Amy performing well after illness in 46:13 Peter rolling back the years to finish in a great 44:43. 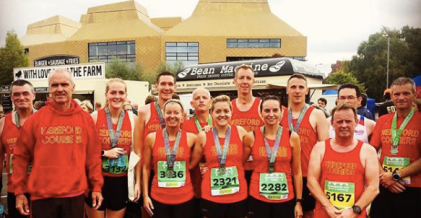 A large group of couriers went over to the Worcester Run event which gave the runners a choice of either the 10k or Half Marathon distance to take on, both races started and finished at just before the Pitchcroft racecourse. The 10k route was around the Worcester streets going out to Diglis Marina on a relatively flat course, with the half marathon course being the 10k course with a loop out around Lower Broadheath.

In the Half Marathon the Couriers did not disappoint with some great times coming from the lads in red, Paul Jones took another chunk off his Half Marathon PB recording a fine 1:22:51 (I’m sure it was the new shoes!) with Tim Taylor recording a solid time of 1;24.32. Shaun Fitzpatrick had a good run out to finish in 1:36:52 with Kevin Rowe on his Couriers debut performing well in 1:39:42, David Bridgewater added to his recent good mileage to finish in 2:06:04.

More of the Reds decided to take on the shorter 10k distance with PB’s up for grabs on the flat(ish) route, Matt James was the first Red past the line with a great time of 36:35. Next up a team of Ben Skinner, Jake Underhill and Chris Cleary worked together to come home in 39:20, 39:23 & 39:33 respectively to all achieve their first sub40 road PB’s. Dave Williams ran well to finish in 41:44. Ladies Clare Mallender & Becky Eversham added to their recent success on the track to pick up personal best performances in 45:18 & 46:48. Kerry Wathen had a good run out after illness during the week to finish in 47:44. Kev Barnes (minus the Couriers red compression sock) recorded a time of 49:07 with Paul Gilbert making his couriers debut (minus the red vest) beating his pre-race target of sub 52mins to finish with a new personal best of 51:03 & Izzy Seal had a good run to finish in 54:43 she also appeared on Worcester News main race facebook post sporting the iconic red vest!