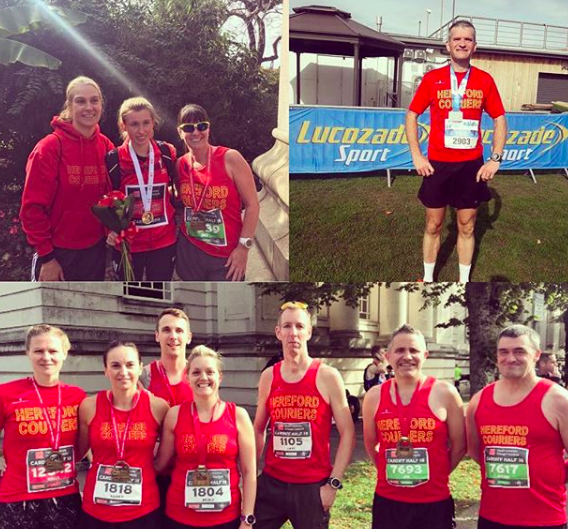 It was another weekend of fantastic performances for the reds with many runners picking up personal best performances at both the Cardiff Half & Chester Marathon on Sunday.

A group of Couriers were joined by 19,000 other runners in the Welsh capital for the Cardiff’s largest road race which takes runners around capital’s most iconic landmarks with beautiful scenery and historic buildings. The predominately flat and fast course & the near perfect conditions made it ideal for some fine individual performances.

Jake Underhill ran the race of his running career so far to knock 5 minutes off his previous half marathon best to record his first sub 90 mins half in 1:27:29, Chris Cleary continues with his good form after his recent road sub 40 10k to pass the line in 1:34:55. Sheryl Evans had a fantastic performance to get under sub 1hour 40 and crossed the line in 1:39:22. Both Becky Eversham & Kerry Wathen came away with new personal bests after a solid few months of training to record times of 1:41:12 & 1:41:56.Kelly Marshall picked up a new PB in a fantastic time of 1:46:30, with Jim Smith was very close behind in a time of 1:46:39, Kev Barnes stopped the clock in 1:52:03 & Paul Gilbert in his 2nd outing for the Couriers met his pre-race target to get his first sub 2 hour half in a time of 1:58:14.

Paul Jones was our sole representative at the Chester Marathon with the route being both historic and scenic but more importantly the ideal conditions for Paul to attempt his first Sub 3 hour Marathon. Paul did not disappoint after months solid training and keeping to his plan it all paid off with Paul recording a fine time of 2:59:01.

Another great weekend to be a Courier, Well done everyone, onto the first Cross Country we go!