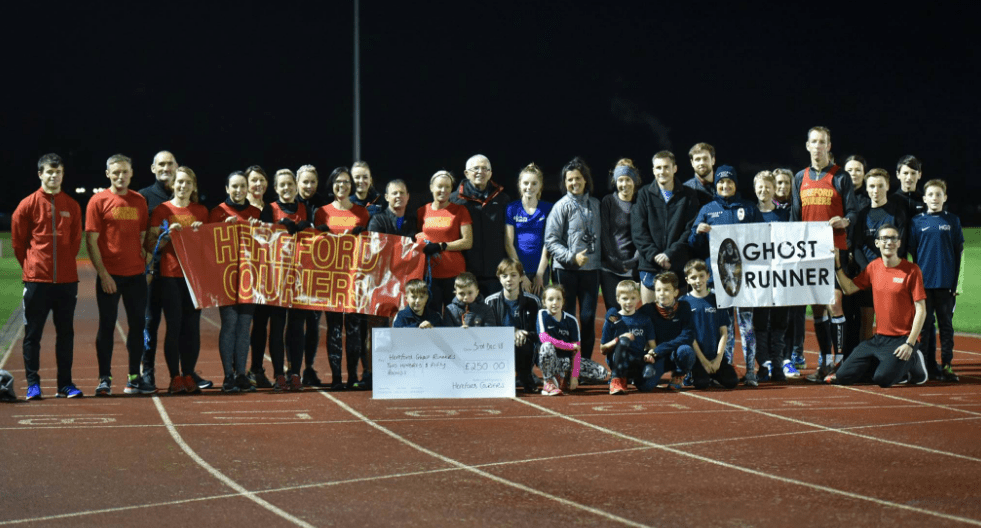 Hereford Couriers have put their support behind a local campaign to create a sculpture in honour of John Tarrant with a £250 donation.

Tarrant was known as the ‘Ghost Runner’ as he was never officially recognised by the authorities because he accepted £17 as a teenager boxer, which meant that the Amateur Athletic Association banned him from taking part in any races.

But John, would often defy the rules and would turn up – and then win – the races he was barred from entering. He even broke the world record at both 40 and 100 miles.

Tarrants legacy lives on through the Hereford Ghost Runners training group who meet every Monday evening at Hereford Leisure Centre coached by Nicola Tyler and Lisa Ruck with many of the senior runners who have progressed to run for many clubs across Hereford.

Club chairperson Mike Link said “Hereford Couriers Running club owe so much to the Hereford Ghost Runners, we would not be the vibrant club that we are today without the close bond we have, much of the success of our club has come directly from the legacy that John Tarrant has left behind including the athletes that were initially coached by John’s brother Vic. Those very same athletes have become the coaches of the Ghost Runners in Nicola and Lisa, with many Couriers benefitting & improving from the Ghost Runners training group we felt it was only right show our thanks and support to a project that not only honours the greatest running athlete to run the streets of hereford but also to a symbol of inspiration for future runners”

Nicola Tyler added “I’m overwhelmed by the support and generosity of the Hereford Couriers who’s donation and support has been fantastic towards the Ghost Runner campaign, the sculpture will continue to inspire runners of all ages in Hereford for years to come, The sculpture is really making some great progress”