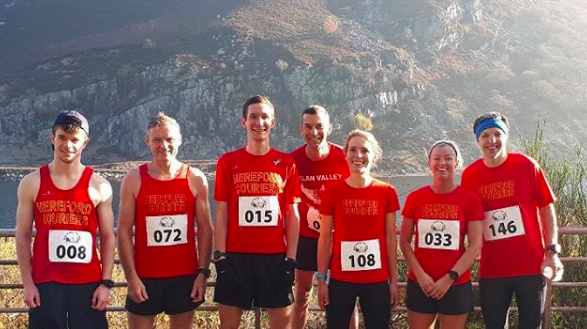 A team of Couriers took on the undulating 10 mile course around the Elan Valley on Saturday with many of the reds picking up superb personal best performances in a competitive field of close to 200 runners.

The race started up on by the top of the Caban Coch Dam gave runners a picturesque first mile down hill towards the visitor centre, The race then took runners out on a loop around the hilly roads around the Carn Gafallt before returning to the finish at the Elan Valley Visitors Centre.

The first Courier to finish was the ever improving Ryan Knight who brought his 10 mile PB down to 1:05:15 to finish in a fantastic 4th place, Andy Tyler was hot on Ryans heels putting in a great performance in a time of 1:05:50 for a new PB in 6th place, next up was Tim Taylor who finished in 12th place in a time of 1:06:45 with Ben Skinner picking up a new best time of 1:11:58 finishing in 24th place.

Clare Mallender was the first Courier lady home knocking over 4 minutes off her time from last year finishing 54th in a time of 1:16:52 closely followed by the ever improving Hannah Watkins who finished 4 places behind in 58th – 1:18:09.

A very well organised race by Rhayader Running Club with many of the reds agreeing that they will be back to take this on again next year! 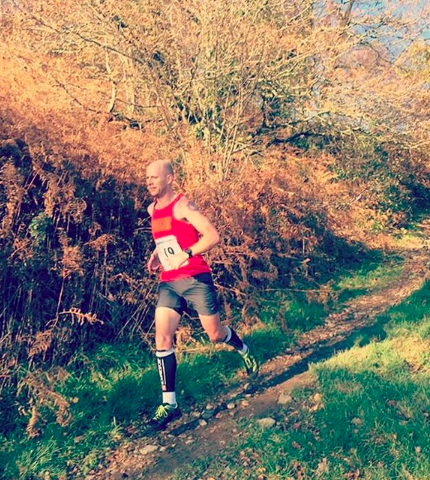 Recent recruit Bobby Pritchard took part in the Caer-Hilly Trail Challenge on Sunday, the race was far from a gentle Sunday run & wasn’t for the faint hearted.

The trail challenge covers over 305 meters of climbing, took runners over scenic fields, up rocky pathways, through bogs, over sties and dodging low hanging branches along the 5.5mile course.

Welcome to the Reds Bobby!