On a weekend that the recent sun was replaced with rain this did not deter the many of the Couriers who turned out in force at a number of races over Saturday and Sunday. 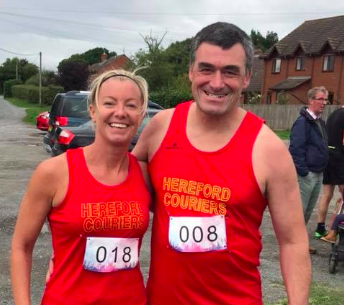 The duo of Clare Mallender and Kev Barnes took part in the 11km Jacks Dash race on Saturday, The race started and finished at the Moon Inn, Garway taking in some of the South Welsh border along with its picturesque views to the the summit of Garway Hill before runners made their way back to Moon Inn for a pint and a burger. Clare had a fine race to finish as the first female in a time of 57:06, Kev  enjoyed the hills fueled by his full english Tesco breakfast finished 24th 62:13, All proceeds of the race went the the Midlands Air Ambulance on the day raised £380 for this great cause.

AWARDS GALORE AT THE CREDENHILL CANTER.

The Couriers had a good turnout at the local Credenhill Canter race on Sunday afternoon with the team picking up a whole host of prizes. The Reds took on the 11km course which is very much a race of 2 halves with the first one being on mainly flat roads, fields and trails before the second one bringing the woods which is more up than down before finishing at Credenhill Church.

The award categories were somewhat different to the majority of races but that did not stop the Red’s picking up plenty. Ben Skinner was the first Courier to pass the finishing line in 2nd place overall in 45:13 just ahead of Ross Cameron in 45.22 who added another medal (1st U20 Male) to his ever growing trophy cabinet. Andy Tyler had a strong run to finish 4th (& first U50 Males) adding to his recent success at the summer cross country league series & Jake Underhill knocked 9 mins off last years time finished in 48.05 (3rd U50M).

Ryan Lawrence, who continues to improve ran well to record a time of 48:43 (2nd U30M) with Darren Broady not far behind in 50.05 (3rd U30M). Aisling Freeth was the 2nd female overall and the first U30F adding to her recent success at the Herefordshire 10miler. It was great to see Nigel Reade in a Red Vest again finished in 56.55 and Bronwen Tyler-Jones made her Couriers debut in style winning the first U50 Female prize after finishing in 65.56.

See the full times below;

Steve Herington took part in the British Masters Track & Field Championships at the Alexander Stadium Birmingham on Sunday finishing 6th place in the V70 category in the 5,000m in a time of 22:19

Couriers Paul Jones, Ryan Knight, Kelly Marshall & Anna Simpkin took part in the Severn Bridge race which offered both the 10k & half marathon distances for runners who want to run across the bridge which joins England & Wales over the Bristol channel. The race was held in torrential rain but the conditions did not put the Couriers off, Anna & Kelly took part in the 10k with Kelly finishing in a time of 47:37 & Anna going sub 1 hour in 58:50. Paul & Ryan took on the Half Marathons and both came away with fantastic times, Paul stopped the clock in 01:25:49 with Ryan setting a new PB knocking another 30 secs in 01:28:31.