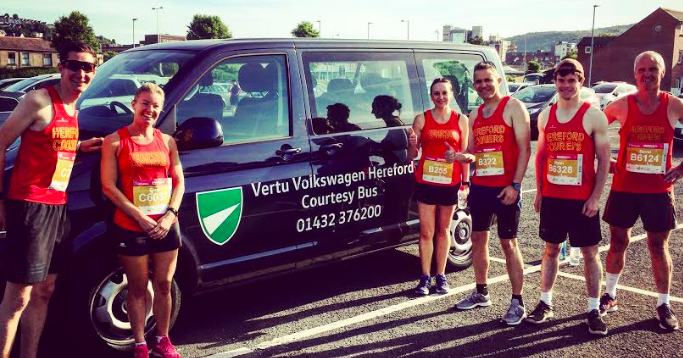 A team of reds took on the challenge of the Swansea Half Marathon on Sunday 25th June, under sunny skies as temperatures climbed throughout the 13.1 miles. The race started in the city centre and went out along the seafront out to the mumbles and back.

With the race starting at 9am it was a 5:45 start from Hereford for the Couriers who traveled down together in a mini-bus kindly supplied by Vertu Volkswagen, Hereford.

As the temperatures soared so did the Red’s  performances with many of the team picking up new personal best times. Matt James was the first red vest through the finish line in 1:22:32 (64th Place), Ryan Knight joined the sub90 club with a fantastic personal best run of 1:28:51 (167th), Jake Underhill continues to get closer to the sub90 chipping another couple of minutes off his personal best to record a time of 1:32:44 with Dave Williams only 10 seconds behind with a great run in 1:32:54, Ben Skinner was another red to PB taking his best down to 1:34:43 & Jim Smith smashed his pre-race target of 1:40 to record a new PB of 1:38:37.

Clare Mallender picked up another sub 1:40 time being the first lady courier home in 1:39:20, Sheryl Evans ran well on her first long race since the London Marathon came 11th in her category in 1:40:32 (Sheryl you must attract these hot races!). Another personal best was recorded when Kerry Wathen crossed the line smashing her previous in 1:43:30 & David Green had another solid run to stop the watch on 1:48:45.

A great day racing for the reds in tricky conditions, it was a really orgainsed event with plenty of support & extra water stations due to the heat – one for next years race calendar. Well done to all who completed (a good little warm up for Wednesdays Cross Country race) & many thanks again to Vertu Volkswagen, Hereford who supplied the team with a mini-bus for the journey.