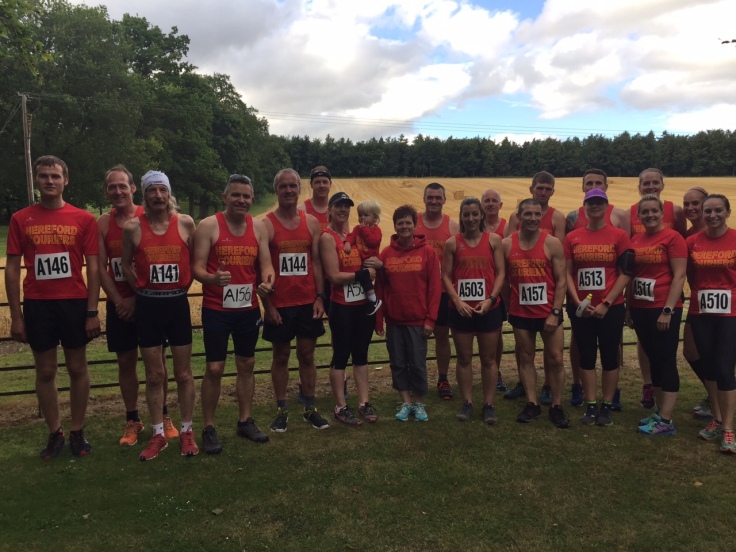 After the disaster at High Vinnals in the rain when we couldn’t muster a full team, Couriers were out in some force for the last two matches with Matt James back in superb form winning both events in imperious style. What a shame he missed the first 2 fixtures as a 5th league title was there for the taking with him easily defeating the eventual champion, Sam Mayglothling in these final two races! On the team front, we pulled ourselves up to 7th, a TW (Team Worst) down from what was a disappointing 4th last year. Time to get back to winning ways! On which note, it’s great to welcome Barry Reynolds to the Club, a class athlete who will be a valuable addition to the team.

Behind Matt, Mike Link was 22nd in both fixtures, a bit down on his brilliant run at Vinnals but still crucial for the team. At Shobdon he lost 2nd Courier spot to the returning Richie Richards who picked up where he left off with a fine16th and 1st V50 on the night. Dave Williams was untroubled winning the overall V55 category with continued consistent performances here in 30th and 27th. It was great to have Ross back for the last race and the youngster ran strongly for 30th and 1st junior man. Also returning in style for Shobdon was Chris Cleary finishing fast after a leisurely start in 43rd.

After a gruelling mountain marathon in sweltering conditions in June, former track man, Nigel Reade stepped down in distance for these two races and, despite not being fully recovered, showed his competitive mettle in 52nd and 51st. Both times he went out hard only to be overhauled by Herington (55th and 53rd)towards the end and then in the last half mile flying mercilessly past the poor old boy.  “Well, I can’t be beaten by an old codger like that, can I?” He explained. “I mean, he’s the sort of guy who uses his winter fuel allowance to buy new kit. But why would you need a red Nike snood at Shobdon? It’s not on, is it?”

In the latter race there was a strong Couriers female contingent with Amy Smith 63rd ahead of  Sheryl, 72nd, who had placed 65th at Abbey Dore. Of course Sheryl is a speedster much happier on the road than the country but who still dominated her category here decisively winning the Series V45 division despite, dare I say it, being towards the top end of her age group. She had a couple of good battles with the tough Dave Green  (71st and 64th) just edging it over the Series 2-1. At Shobdon our other new powerful road running recruit Jim Smith held on well for 60th after a speedy start.

In this race we managed to field 3 full teams of 4 men and 2 women and it was heartening to see such a strong women’s squad in both fixtures. Making their debuts on the demanding Abbey Dore course where there were 140 finishers Kerry Wathen 105th and Becky Eversham 112th both ran very impressively with clearly more to come as they gain experience off road. At Shobdon in a huge field of 178, Kerry improved dramatically to a fine 92nd while Becky’s 149th saw her still clear of many able runners. Fiona Murdy, the ultra woman now a regular at Nikki and Lisa’s Monday track sessions to work on her speed, was 136th at Abbey Dore but higher up the field in 157th at Shobdon. It was good to see Izzie Seal in the latter race battling strongly to 139th again with a large chunk of the field behind her. Making her debut at Shobdon we also welcomed Kelly Murray who had a promising run in 153rd on this tough circuit. The winter league starts in October with races on Sunday mornings. Let’s keep the red wine flowing!

No, have no fear. I haven’t forgotten Kev, Kev, the man of nature. It’s just that he only fits into a paragraph this size. After uncharacteristically missing the Vinnals fixture, he was back in marauding action at Abbey Dore (95th) and having, in contrast to all around him, enjoyed the double water splash, became incensed to find himself impeded by a herd of cattle which, with the resident bull safe in Merv’s stall, back at the farm, evidently mistook the rampaging Kev for a male of the species and became exasperatingly frisky. “It’s no joke running amongst that lot” he complained “ blowing out at you, bellowing and backing on to you and what have you. They cost me half a dozen places, blast ’em.”  But things turned out much better at Shobdon (104th). Having taken time during the Offa’s Dyke 15 to round up a family of swans, the word had spread to Shobdon and the resident cob was waiting for our boy, the berry on his bill engorged, wings flexed and phlegm up ready to hiss. And of course Kev runs right by him and takes a stinging whack on the back of the leg from the flashing wing. “I only wanted to stroke his lovely neck,” he reflected, “but here’s the beauty of the thing : that whack he gave me has cured my achilles completely. My advice would be, chuck out the foam roller and get a swan. They’ve got lovely necks.”

So, another summer series over, all the races bar Vinnals run in fine conditions. We are so lucky in Herefordshire, not only to have great courses superbly designed by members of participating clubs but to have an organiser as dedicated and efficient as the incomparable Mike Blenkinsop. Thanks to him and of course to Clive and Tracy who worked so hard on the finish line without catching a glimpse of cattle or swans. Get those injuries sorted you two!