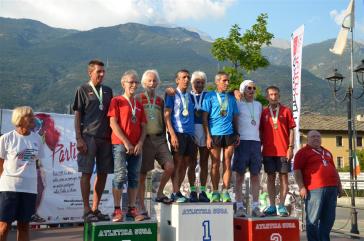 ROAD AND ROCKS IN THE SUN

These annual champs were held this year in the Alps at Susa, Piedmont some 30 miles west of Turin, close to the French border. You could call the course a curate’s egg if you like but I prefer to characterise it as half wren’s egg and half ostrich’s…….Why? Because the first 2.5 K was mainly flat and on the road through the lovely little town, while the final 4 K had 2,500 feet of climb up rocky paths sometimes not runnable.

The old boys (65 and over) started at 10.30 am, half an hour after the women, when the temperature was around 30 degrees in the town. We were sent on our way down a steep tarmac road from the imposing Arch of Augustus dating from the 8th Century BC. I went pretty hard at the start having convinced myself that an early road race would not interfere with the climbing capacity needed later. After all, certainf fell runners warm up with a nice little Parkrun before heading for the hills.

In a field of 56, quite a bit bigger than last year’s race, there were 5 Brits, two unknown quantities to me plus the 2015 winner Ben Grant from Harrogate and Dic Evans of Cardiff, a frequent guest in the Herefordshire League. We’d won the team race back in 2013 but knew it would be a much stiffer challenge this time round given a) the strength in depth of Italy on home soil and b) our own advancing years, all of us being in the penultimate year of our category so up against some lively young whippersnappers.

The climb certainly proved tough and I was frustrated at having to walk in places. I pretty much held my position from the road, at one point needing a bump-up from behind from a fellow competitor (not GB naturally) as I overtook a flagging woman only to find I’d lost traction and stalled scaling a lump of rock.

But most memorable for me was overtaking someone in the finishing straight. That doesn’t happen often. I was hoping for top 20 but ended with 22nd, a good way behind Ben who was a fine 4th, with Dic in 33rd. This was good enough for bronze team medals behind Italy, who dominated, and Germany but clear of Slovakia in 4th.

I managed to beat all the V70’s, including Martin Ford, who was a frustrating close up 4th in the category but at least had the satisfaction of taking team silver along with fellow Cheltenham Harrier, Ken Buckle.

Congratulations to everyone who turned out to the 4th race of the Herefordshire XC Winter League yesterday, A fantastic performance by overall race winner Matt James who spearheaded the Men's team of Tom Synge-Curtis, Ross Cameron & Jake Underhill to first place for the 2nd race in a row, in the ladies race we had another solid performance from Katie Synge-Curtis who finished in 2nd place. Well done to everyone who took part today & a big thankyou to Hereford Triathlon Club for hosting the race. All the results are now on the club website: https://herefordcouriers.com/racing/crosscountrywinterleague/
This weeks training options: 📆 Monday 🎽 Hereford Ghost Runners track session with Nikki & Lisa 📌 Hereford Athletics Track (£2 for track hire) ⏰ 6:30pm 📆 Tuesday 🎽 Couriers Social Run, join our run leaders for our structured session for all abilities 📌 Hereford Leisure Centre ⏰ 6:30pm 📆 Thursday 🎽 Couriers Clubrun, join us for our 6-7mile clubrun 📌 Hereford Leisure Centre ⏰ 6:30pm 📆 Saturday 🎽 Hereford Parkrun 📌 Hereford Leisure Centre ⏰ 9:00am 📆 Sunday 🎽 Croc8 Recce 🐊🎱 📌 Bell of Tillington ⏰ 9:00am Enjoy your week of running everyone 🏃‍♀️🏃‍♂️
Couriers Club AGM 📆 6th March 📍 Hereford Rugby Club Save the date, full details to follow
It's our first social run of 2020! Join our group of run leaders who will take you from warm up to warm down with about 5k in between, it's open to everyone with a loop back system so the group stay together. ⏰6:30pm 📍Halo Leisure centre Everyone is welcome, See you later!
New year, same old great training options for you this week Enjoy your week of running everyone 🏃‍♀️🏃‍♂️
Entries now open to Hereford Couriers Spring Race Series 2020. 🍟 chip timed 🏅 bespoke medal 🛣 fast and flat course Race 1️⃣ Weds 1st April Race 2️⃣ Weds 6th May Race 3️⃣ Weds 3rd June ⏰ 7:15pm Start 📍 Hereford Racecourse #herefordcouriers #5k #5kseries #fastandflat #personalbest #course www.entrycentral.com/Hereford-5k-series