Most of you are aware that I’m a big fan of the MudRunner Adventure Race Series located within the grounds of Eastnor Castle. I had previously competed in the “Classic” and “Oblivion” on a few occasions before but this would be my first “Ice Breaker”.

Ice Breaker – Severe Winter Duathlon, a 10km cross country run over the tracks where Land Rovers are now tested, a 20km mountain bike over the Malvern Hills and a final 3km run.

After a PA failure the race started, and this being MudRunner, the first climb was just around the corner which immediately split the pack. I stayed at the front of the group while one guy went flying off the front. I would not see this guy again untill the finish! As the course weaved through the woods, I was now on my own in 2nd place, while a chasing group had formed about 1min 30s behind me. I tackled the steep banks, mud pits, swamps, fast decents and soon hit the road section back to transition. (The eventual winner had already put 2 mins into me at this stage!)

I pulled my muddy shoes off, put my helmet and glasses on, clipped into my mountain bike shoes and sped off out of transition. At this point I was keen to keep my advantage over the chasing group for as long as possible. I necked an energy gel and dug in on the climbs. Now I like to think of myself as a pretty reasonable mountain biker, I found the first part of the course testing, challenging ascents and technical descents, the second part was horrendous! The mud was unbelievable, I daren’t get off the saddle as the rear end would be fish tailing all over the place meaning I had to stamp down on the pedals, throwing my weight back to try and get some traction. I had now been caught and passed by the chasing pack, I found myself now with a few guys of the same ability and we battled it out over the next few climbs and mud pits. The sound of disc breaks screeching was ear piercing. To put some perspective on how hard the mountain bike course was, I averaged 8.5mph for 12miles!

Back into transition, I was now 9th,  bike racked, shoes, glasses and helmet off, muddy cross country shoes back on! I had a quick transition and exited immediately overtaking someone, baring in mind the last run was just around the castle grounds and was only 3km, I knew I had alot to do. Now 8th I overtook another 3 competitors before the 2km point, I waded through the stream section but could see no one ahead.

I finished 5th overall in 2hr 28m 36s. 350 took part. I placed 1st in the 20-30 category. I had the 2nd quickest first run, 23rd fastest mountain bike and 6th fastest second run. Overall I was extremely happy with my performance, I had paced the first run right which was crucial, I knew I wouldn’t be able to hold off the guys on the mountain bike for too long and the last run was just a case of giving it everything you possibly could.

This was by far the hardest event I’ve ever taken part in! But one of the most rewarding too as I have now achieved official “Mud Master” status. 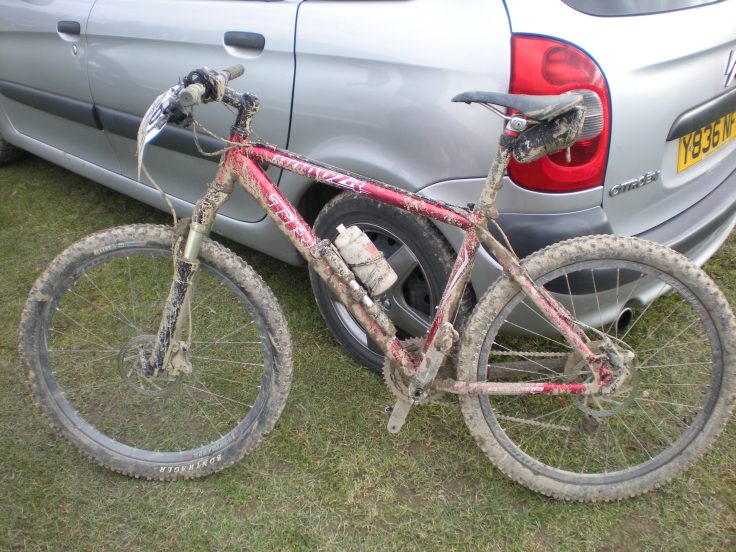 This took an hour and a half to clean!!!